Moeuvres Communal Cemetery was next, an extension of the normal French Cemetery. Here lay Charlie Pope VC of the Metropolitan Police, Chelsea Division, who had enlisted in 1915. On 15th April 1917, he and his small company of eleven men were holding an important outpost near Lagnicourt. They found themselves surrounded by a large force of the enemy. They kept the enemy at bay until they had run out of ammunition. Charles Pope was last seen, leading a last desperate, bayonet charge in to the Germans. When the bodies of him and his men were recovered, they were found surrounded by 80 dead enemy soldiers. Charles Pope was awarded the VC, The highest honour. A Poppy wreath on behalf of the Metropolitan Police, was laid at his grave by DAC John Grieve CBE. 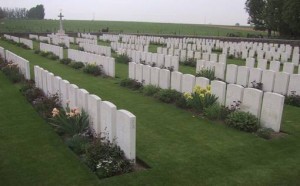 On to Tank Cemetery we next went, where were buried many Cameron Highlanders killed in an attack on Cavalry Farm on 28 April 1917 during the battle of Arras, In their original trench grave. Here they were laid side by side by the burial party, because of lack of space in the grave, in their kilts with each man’s arm around the next. There we were shown a Lee Enfield rifle by Clive, a superb infantry weapon of the Great War. After this we returned to the hotel for drinks and dinner.

On Tuesday morning it was cloudy, but not so cold. We were on our way to Belgium and the famous Ypres Salient but before that, our first visit of the day was to Chilli Trench Cemetery. Here was buried a young WWII fighter pilot, Flying Officer, David Berry, whose Hurricane was shot down in May 1940 and crashed in flames in the nearby fields, 11 miles from where his father lies buried. He was seen to stagger from the wreckage into the nearby Chilli Trench Cemetery, where he fell dead. His father Edmund Berry, was killed in the First World War in December 1914. His mother regularly visited both graves.

After that we continued to Rue des Berceaux Military Cemetery, near Neuve Chapelle which holds the grave of Captain Tony Wilding, a tennis professional from Christchurch in New Zealand. He has been in the Royal Marines and he was killed on 9th May 1915, aged 32. Clive related the story of him being an absolute Tennis ‘Star’ and had won the men’s final at Wimbledon 5 times. A very handsome man, he was a favourite with the women! There were many unidentified soldiers in the cemetery, 226 of them and their gravestones show the inscription: “Known Unto God”.

As we were heading to Ypres we stopped en route at Sanctuary Wood Cemetery in Belgium, where there were even more unknown soldiers – 1,353 of them. Sanctuary Wood is one of the larger woods in the commune of Zillebeke. It was named in November 1914, when it was used to screen troops behind the front line. It was the scene of fighting in September 1915 and was the centre of the Battle of Mount Sorrel (2-13 June 1916) involving the 1st and 3rd Canadian Divisions.

There were three Commonwealth cemeteries at Sanctuary Wood before June 1916, all made in May-August 1915. The first two were on the western end of the wood, the third in a clearing further east. All were practically obliterated in the Battle of Mount Sorrel, but traces of the second were found and it became the nucleus of the present Sanctuary Wood Cemetery. 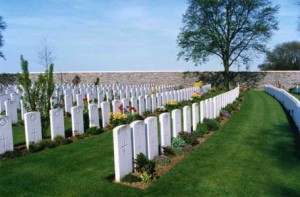 Buried here are WWI chums of a Hampstead Pal who had come on a number of trips, the late Bill Hay, a veteran soldier of the Great War. He had been a company sergeant major in the 9th Royal Scots and his ashes were scattered here in 1985, at his request, by the Hampstead Pals. Jon told us all about his life and times. We continued from there to a private house in Poelcapelle where the owner was building a WWI tank and we also saw an aircraft, a first world-war Spad he had beautifully restored.

The next stop was at the huge Tyne Cot Cemetery where almost 12,000 British & Empire soldiers are buried or commemorated, including six who had been awarded the Victoria Cross. On the surrounding walls are the names of 35,000 others, whose remains were never found. These names are a continuation of the 54,000 names inscribed on the Menin Gate in Ypres, after space there ran out.

In Ypres we went to the beautiful, Ramparts Cemetery, before going to local restaurants to have dinner and lots of Belgian beer, so as to be in time to go to the Menin Gate, for the sounding of the Last Post at 8.00 p.m.

The Last Post Ceremony has become part of the daily life in Ieper (Ypres) and the local people are proud of this simple but moving tribute to the courage and self-sacrifice of those who fell in defence of their town. 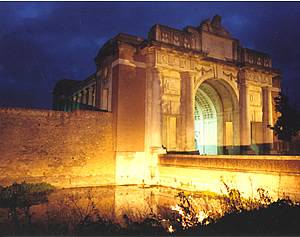 In 1928, a year after the inauguration of the Menin Gate Memorial, a number of prominent citizens in Ypres decided that some way should be found to express the gratitude of the Belgian nation towards those who had died for its freedom and independence. The idea of the daily sounding of the Last Post – the traditional salute to the fallen warrior – was that of the Superintendant of the Ypres Police, Mr P Vandenbraambussche. The Menin Gate Memorial on the east side of Ypres was thought to be the most appropriate location for the ceremony, as was suggested by Lord Plumer. Originally this was the location of the old city gate leading to the Ypres Salient battlefields and The Menin Road, through which so many British and Commonwealth troops had passed on their way to the Allied front line. It is indeed a sacred place to the British nation.

From 11th November, 1929 the Last Post has been sounded at the Menin Gate Memorial every night and in all weathers. The only exception to this was during the four years of the German occupation of Ypres from 20th May 1940 to 6th September 1944. The daily ceremony was instead continued in England at Brookwood Military Cemetery, Surrey. On the very evening that Polish forces liberated Ypres, the ceremony was resumed at the Menin Gate, in spite of the heavy fighting still going on in other parts of the town. Bullet marks can still be seen on the memorial from that time. The drive back to Arras after the ceremony was done in record time! The bar remained open on the coach. When we got back many of us visited the nearby ‘Passe Temps’ bar. It had been along day.