On Wednesday morning we proceeded to the Somme battlefields under cloudy skies, but before long they turned blue and it became a lovely, warm and sunny day. Our first cemetery of the day was at Warlencourt. Here our Pal, David Isaacs talked about how he came across the grave of his uncle, Second Lieutenant Moss Cohen, who was killed on 15th September 1916 aged only 22. In this cemetery were laid a huge 1,823 unknown soldiers. The Nearby, Butte de Warlencourt and Eaucourt-L’Abbaye, were the scene of very fierce fighting in 1916. Eaucourt L’ Abbaye, was taken by the 47th (London) Division early in October. The Butte was attacked by that and other divisions, but it was not relinquished by the Germans until the following 26th February, when they withdrew to the Hindenburg Line. The 51st (Highland) Division fought a delaying action here on 25th March 1918, during the great German advance, and the 42nd (East Lancashire) Division recaptured the ground on 25th August 1918. The cemetery was made late in 1919, when graves were brought in from small cemeteries and the battlefields of Warlencourt and Le Sars.

On we went to Ovillers Military Cemetery. On 1st July 1916, the first day of the Battle of the Somme, the 8th Division attacked Ovillers and the 34th Division La Boisselle. The villages were not captured, but ground was won between them and to the south of La Boisselle. On 4th July, the 19th (Western) Division cleared La Boisselle and on 7th July the 12th (Eastern) and 25th Divisions gained part of Ovillers, the village being cleared by the 48th (South Midland) Division on 17th July. The two villages were lost during the German advance in March 1918, but they were retaken on the following 24th August by the 38th (Welsh) Division. British dead lay in swathes here. 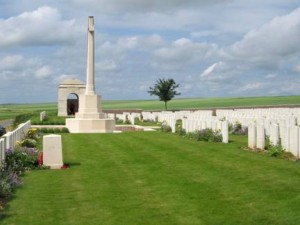 Ovillers Military Cemetery, which stands on the edge of ‘Mash Valley’ was begun after the capture of Ovillers, as a battle cemetery behind a dressing station. It was used until March 1917, by which time it contained 143 graves, about half the present Plot I. Amongst the known dead was Sir Harry Lauder’s son; Captain John Lauder, killed in December 1916 while serving with the Argyles. He had felt the grief of the loss of his son very heavily and wrote the song ‘Keep right on to the end of the road’ soon after.

Amongst those buried here are members of the late Alf Razzell’s battalion, 8th Royal Fusiliers who were practically wiped out in an attack on the village on 7 July 1916. Jon spoke about Alf and his colourful war service and remembered his Colonel, Albemarle Cator Annesley DSO, OC 8th battalion who was recognised in the London Gazette for ‘conspicuous ability and energy when in command of his Battalion. The success of the attack and the subsequent defeat of counter-attacks were due to his foresight, energy, and example.’ He was killed in this action leading his boys in. A very gallant soldier. A wreath was laid in memory of Alf Razzell and his battalion. Written on his grave at Warloy Baillon is, ‘He greatly lived, he greatly loved and he died right mightily.’

On we went to the famous Lochnagar Crater where 24 tons of high explosive were detonated on 1st July 1916 at 7.30 a.m. The effects of the explosion were so immense that they were felt in London and it sent debris up to 10,000 feet into the air. 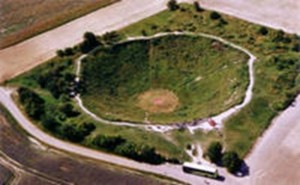 Over 600 Germans were killed by the explosion and still lie under the fields nearby. The Somme was a truly awful series of battles, with over 450,000 casualties incurred by the British Army.

The names of 73,000 British Soldiers who were missing and never found are engraved on the memorial, which was designed by Sir Edward Lutyens.