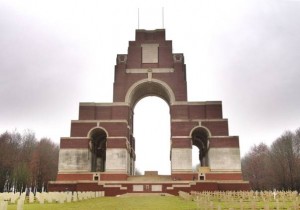 We had lunch at Bouzincourt Cemetery (quite appropriate named for the amount of wine which was consumed) This spot is one of the highest points on the Somme with great vistas across the surrounding countryside. The sun was hot and it was probably one of the best picnics ever experienced by the pals.

Here in this stunning cemetery, lies Lieutenant-Colonel John Stanhope Collings-Wells VC DSO (19 July 1880 – 27 March 1918). He had enlisted in the Hertfordshire Militia, and was commissioned into the Bedfordshire Regiment on 14th March 1904. He was made lieutenant in September 1904 and captain in January 1907. When war broke out, he travelled to France with his Regiment on 22nd August 1914. In the winter of 1914-15, he was wounded and invalided home. He returned to the front lines in July 1916, with the rank of Major, in command of a company. He was promoted to acting Lieutenant Colonel in October 1916. Collings-Wells was awarded the Distinguished Service Order in 1917 for his command of a battalion, which captured and held the northern outskirts of Gavrelle on the 23rd April 1917. Further, on 29th April he commanded a composite battalion, which attacked and captured the Oppy line. He was also mentioned in despatches in November 1917.

On we went to Mailly Wood Cemetery. Here John Jenkins recounted the story of Private S G Nash of the Royal Warwickshire Regiment who was killed at the age of 22 and who came from his home town of Chorleywood, Herts.

The last stop of the day was at the AIF Burial Ground in Flers. Here under the shade of a tree, while we sat on the beautiful lawn, Eric Page spoke about the experiences of Raymond Asquith and also of how others, who became Prime ministers, were involved in the war: Winston Churchill, Clement Atlee, Anthony Eden and Harold Macmillan.