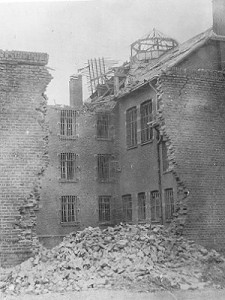 ‘Operation Jericho’ was a low-level World War II bombing raid by Allied aircraft on Amiens Prison in German-occupied France on 18th February 1944. The object of the raid was to free French Resistance and political prisoners, 120 of whom were due to be executed by the Nazis, the following day.

Mosquito bombers, attacking in three waves at a height of only 10 feet, succeeded in breaching the walls and buildings of the prison, as well as destroying guards’ barracks. Of the 717 prisoners, 102 were killed, 74 wounded, and 258 escaped, including 79 Resistance and political prisoners, although two thirds were recaptured. One of the inmates was also privy to sensitive information concerning Operation Overlord, the D-Day landings..

One Mosquito of the Photo Reconnaissance Unit circled the target from 400 to 500 feet using a cine film camera, but carrying no bombs. He reported a large breach in the eastern centre of the north wall and considerable damage to the extension building at the western end of the buildings.

At Amiens near the prison is St Pierre Cemetery, which holds the bodies of the victims of both World Wars. Here we visited the graves of the leaders of the raid, Wing Commander Charles ‘Pick’ Pickard DFC and his Navigator Allan Broadley DFC. Sadly shot down and killed at the moment of success.

Amiens Cathedral has the highest church ceiling in Europe and is said to contain the head of John The Baptist. It made sense to make it our next stop and very impressive it was. 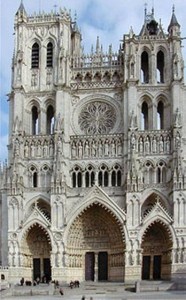 We had a delicious lunch with much wine at Adelaide Cemetery which by the name, suggests it contains many Australian soldiers.

Villers-Bretonneux became famous in 1918, when the German advance on Amiens ended in the capture of the village by their tanks and infantry on 23rd April. On the following day, the 4th and 5th Australian Divisions, with units of the 8th and 18th Divisions, recaptured the whole of the village and kicked the Germans out. On 8th August 1918, the 2nd and 5th Australian Divisions advanced from its eastern outskirts in the Battle of Amiens. Adelaide Cemetery was begun early in June 1918 and used by the 2nd and 3rd Australian Divisions. In 1993, on request from the Australian Government an unknown Australian soldier from WWI was exhumed and is now buried in the Australain Memorial Cemetery in Canberra.

We continued on to Villers Bretonneux Military Cemetery where 609 unkown soldiers lie. It is quite a large cemetery with over 2,100 graves. 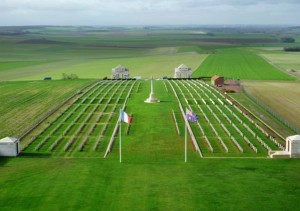 The last visit of the day was to the Indian and Chinese Cemetery at Ayette on the road to Arras. Most of these men, a long way from home, belonged to the Labour Corps, although many also died in the Great Influenza Epidemic of 1919, as well as from the dangerous task of clearing munitions. It was memorable and quite touching in the fact that we lit Joss Sticks and left them at each grave to commemorate their sacrifice.

On the last night we enjoyed a lovely dinner with entertainment from Kevin Hall on the hotel piano, ‘Great Balls of Fire’

On the Friday morning, many of us with sore heads, in beautiful sunshine, we paid our last visit of the pilgrimage to Monchy British Cemetery, where lie the remains of 27 British soldiers, mainly Royal Fusiliers who were discovered buried in shell-holes in the neighbouring fields in 1997. Here we said a final goodbye to the ‘lads.’ Until next time..

Jon read the words of PJ Campbell, an old soldier who had visited the graves of his mates in the 30’s

“They were everywhere. If I had been able to see and hear them I could not have been more conscious of their presence. They would lie still and at peace, below the singing larks, beside the flowing rivers. They could not feel lonely, they would have one another and they would also have us also, though we were going home and leaving them behind. We belonged to them and they would be a part of us forever, nothing could separate us.”