Monday. During the night it started raining and this continued into Monday morning, and we left the hotel, heading for the Somme, under leaden skies, with intermittent showers.

We were taken first to the site of the Battle of Mash Valley, where British troops had been mown down by heavy machine-gun fire, with a huge loss of life, while trying to take the salient opposite.  The battle started on 1st July 1916 and on that day alone 19,000 British Troops died and the total casualties including wounded and missing, were 58,000.  It was a day of utter carnage for the 2nd Middlesex in Mash valley, their Colonel later committing suicide. We also heard about the ill-fated attack by the 8th Royal Fusiliers on the 7 July, when Colonel Annersley was killed, leading the battalion to the objective. ‘He greatly lived, he greatly loved and he died right mightily’

Gradually the weather started to improve from here, with the sun breaking through, although there was a strong cold wind, which had everyone huddled in the jackets and coats. Here we left our wreath in memory of veteran soldier Alf Razzell and his comrades of the 8th Royal Fusiliers killed in the assault on the village. 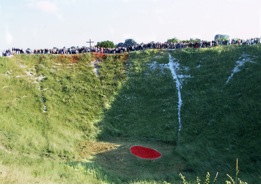 The next stop was at the massive Lochnagar Crater  The largest British mine crater on the Western Front, this was one of several mines exploded under the German front line positions on the Somme on 1st July 1916.  A charge of 60,000 lbs (26.8 tons) of Ammonal explosive was blown at 7.28 a.m. resulting in a crater 90 feet deep and 300 feet across.  Lochnagar Crater, named after the trench from where the main tunnel was started, is now owned by Englishman Richard Dunning.  He saved it from being filled in 1978, and now each year on the 1st July a ceremony is held here to remember men of all sides who fell on the Somme in 1916.

After that we took a short ride to the Thiepval Memorial for a picnic lunch, and to see the monument itself. One of the names, on Pier and Face 10 was Thomas Edwin Lewis, from our village of Woodcote, in South Oxfordshire.

History On 1st July 1916, supported by a French attack to the south, thirteen divisions of Commonwealth forces launched an offensive on a line from north of Gommecourt to Maricourt. Despite a preliminary bombardment lasting seven days, the German defences were barely touched and the attack met unexpectedly fierce resistance. Losses were catastrophic and with only minimal advances on the southern flank, the initial attack was a failure.

In the following weeks, huge resources of manpower and equipment were deployed in an attempt to exploit the modest successes of the first day. However, the German Army resisted tenaciously and repeated attacks and counter attacks meant a major battle for every village, copse and farmhouse gained. At the end of September, Thiepval was finally captured.  The village had been an original objective of 1st July.

Attacks north and east continued throughout October and into November in increasingly difficult weather conditions. The Battle of the Somme finally ended on 18th November, with the onset of winter. In the spring of 1917, the German forces fell back to their newly prepared defences, the Hindenburg Line, and there were no further significant engagements in the Somme sector until the Germans mounted their major offensive in March 1918. 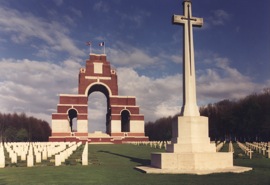 The Thiepval Memorial, the Memorial to the Missing of the Somme, bears the names of more than 72,000 officers and men of the United Kingdom and South African forces who died in the Somme sector before 20th March 1918 and have no known grave. Over 90% of those commemorated died between July and November 1916.

The memorial also serves as an Anglo-French Battle Memorial, in recognition of the joint nature of the 1916 offensive and a small cemetery containing equal numbers of Commonwealth and French graves lies at the foot of the memorial.  Designed by Sir Edwin Lutyens, it was built between 1928 and 1932 and unveiled by the Prince of Wales, in the presence of the President of France, on 1st August 1932. It was originally designed to stand across the Pozieres Road but is more suited in it’s current peaceful position.From the memorial e we drove a short distance and the coach stopped to let us walk to High Wood, the scene of ferocious fighting. Clive Harris brought with him his Lee-Enfield rifle and the walk was most enjoyable. High Wood is not large, but was of tremendous significance during the Battle of the Somme.  The wood was first attacked on 14th July, 1916, but the British were unable to take it.  On the 14th of July 1916, a dawn attack was launched on Longueval and other objectives.  This was known as the Battle of Bazentin Ridge, and in the main, was a success, gaining ground and taking the Germans by surprise.  Towards the evening of that day, High Wood came into the reckoning.  An attack was originally scheduled for 5.15 p.m., although in the event it was delayed first until 6.15 p.m. and then a little later.  The 2nd Queens reached the south western edge of the wood around 8.00 p.m., and shortly afterwards they were joined by the 1st South Staffordshires.   This day was also one of the few where the cavalry were involved.  Squadrons of the 20th Deccan Horse and the 7th Dragoon Guards waited for a while by Crucifix Corner, before advancing.  They saw action, armed with weapons spanning the technology of centuries: lances and machine-guns were both used by the cavalry that day.

The infantry advanced through the wood, but met increasing opposition, especially from a strong German line being prepared, known as the Switch Line, which ran through the northern apex of the wood.  The British could not take this line, although they did hold around two-thirds of High Wood.  Reinforcements were sent up, including men from the 1/9 Highland Light Infantry (Glasgow Highlanders), and like many others over the next weeks and months.

Many more battles, with horrific casualties took place and, on 15th September 1916, High Wood was finally taken by the 47th (London) Division, 2000 of their dead remain in the wood. 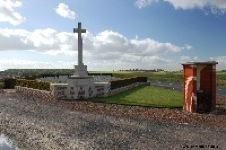 Our final visit that Monday was to the Longueval Road Cemetery.  This is a small cemetery, which was started in September 1915. It was located near a dressing station which was known as ‘Longueval Alley’, or ‘Longueval Water Point’. Outside the cemetery is a small shrine. Legend has it that Julius Caeser addressed on of his legions there during the invasion of Gaul. John Grieve entertained us with a Robert Graves Poem, ‘An old 23rd man’

A trench, or possibly the road itself here, was known as Pall Mall in September 1916. The cemetery was used until January 1917 and briefly again in August and September 1918.  Many of the graves are from October and November 1916. The Cross of Sacrifice is at the triangular apex of the cemetery, and there are special memorials to two men known and one believed to be buried here. The road and track layout here is just the same today as it was during the Great War. From there, we returned to the hotel to freshen up for supper. We were entertained at dinner that night by the  ‘Bill Gemmel band’