Tuesday dawned to a clear blue sky and it was to prove to be a warm and pleasant day.  It was to be a long day, as we headed towards Ypres, stopping at a number of cemeteries and battlefields en route.

The first stop was at Le Trou Aid Post Cemetery, probably the most beautiful of any on the Western Front.  Designed by Sir Herbert Baker it has a moat around the cemetery, graceful Weeping Willows and a delightful stone gatehouse. 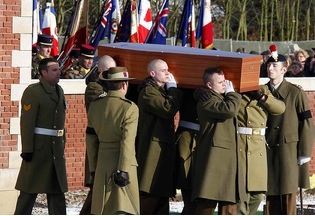 We then went to the nearby, new Fromelles (Pheasant Wood) Cemetery still under construction, following the discovery of the remains of soldiers (mostly Australian) in 2008.   It is the first new cemetery to be built in over 50 years and there are 256 graves of Australian soldiers interred there.  The Queen will be visiting on 19th July to officially open the cemetery and the final soldier will be laid to rest on that day.

The next visit was to The Spoilbank Cemetery, where Clive & Jon took us on a delightful walk along the old canal path to ‘The Bluff’ before we walked on to Chester Farm Cemetery, about 400 yards away where we had a picnic lunch.  Buried here were 420 soldiers and of whom 7 remain unidentified. The cemeteries were begun in February 1915, and used by troops holding this sector until March 1918. It is particularly associated with the casualties of the 2nd Suffolks on “The Bluff” early in 1916. It was enlarged after the Armistice when graves were brought in from the battlefields of Ypres. The cemetery contains 520 burials and commemorations of the First World War; 125 are unidentified and special memorials are erected to 11 casualties known or believed to be buried among them. The cemetery was designed by Sir Edwin Lutyens.

While we travelled on the coach between stops our two guides, Jon and Clive, would recount anecdotes about battles and skirmishes and of the men who stood out for their bravery in them.  There were also, of course, many humorous stories and jokes as well, as one could expect from some 40 people who were either getting to know each other, or had met up on previous trips.  The week developed into the melding of “The Pals”. A most enjoyable aspect of the trip was the daily morning Champagne Frenzy at about 10.30, when the coach would stop, everyone would disembark to have a drink of Bucks Fizz, orange juice, or Champagne, accompanied by fresh strawberries.  These sessions were also known as, “Heart Starters”.

The stunning, Tyne Cot British Cemetery and memorial was the next stop and here I looked for the panel which had the name of John Reginald Brown inscribed. The Tyne Cot Memorial is one of four memorials to the missing in Belgian Flanders which cover the area known as the Ypres Salient. Broadly speaking, the Salient stretched from Langemarck in the north to the northern edge in Ploegsteert Wood in the south, but it varied in area and shape throughout the war. The Salient was formed during the First Battle of Ypres in October and November 1914, when a small British Expeditionary Force succeeded in securing the town before the onset of winter, pushing the German forces back to the Passchendaele Ridge. The Second Battle of Ypres began in April 1915, when the Germans released poison gas into the Allied lines north of Ypres. This was the first time gas had been used by either side, and the violence of the attack forced an Allied withdrawal and a shortening of the line of defence. 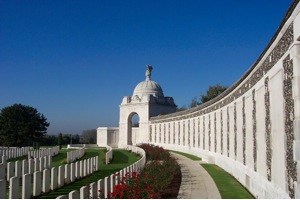 There was little more significant activity on this front until 1917, when in the Third Battle of Ypres an offensive was mounted by Commonwealth forces to divert German attention from a weakened French front further south. The initial attempt in June to dislodge the Germans from the Messines Ridge was a complete success, but the main assault north-eastward, which began at the end of July, quickly became a dogged struggle against determined opposition and the rapidly deteriorating weather. The campaign finally came to a close in November with the capture of Passchendaele. The German offensive of March 1918 met with some initial success, but was eventually checked and repulsed in a combined effort by the Allies in September. The battles of the Ypres Salient claimed many lives on both sides, and it quickly became clear that the commemoration of members of the Commonwealth forces with no known grave would have to be divided between several different sites. This memorial contains the names of 34,000 missing British and Commonwealth soldiers.

Oxford Road Cemetery was next and buried here was Captain Robertson VC of the First Tank Corps.  Also interred here was Ernest George Osman from Woodcote, who had signed up as Private E Osborne.  He had been in the Royal Berks Regiment and had been killed on 18th February 1918, aged 18.  There are so many brave, young men buried in these cemeteries. We also remembered the England Cricketer, Colin Blythe and the original stone cricket ball left by the England Cricket team at his grave, during their 2009 Pilgrimage was still there.

The final stop before Ypres was at Sanctuary Wood Cemetery, a large one, where are buried 637 known and 1,353 unknown soldiers. A wreath was laid in memory of the late Bill Hay, of the 9th Royal Scots whose ashes were left there in 1985 – Bill had been a member of the Hampstead Pals and had made many journeys with them to the old action spots.

At Ypres, on one of the many panels at the Menin Gate is remembered Percival Claude Duncan, another sad fatality from Woodcote. 53,000 missing British & Commonwealth soldiers are commemorated here. Hundreds had gathered at this memorial for the 8.00 p.m. sounding of the Last Post and the laying of wreaths, always a poignant ceremony. The site of the Menin Gate was chosen because of the hundreds of thousands of men who passed through it on their way to the battlefields. It commemorates those of all Commonwealth nations, except New Zealand, who died in the Salient, and, in the case of United Kingdom casualties, before 16th August 1917 (with some exceptions).