Wednesday. It was blue skies again, as the day dawned and becoming warmer by the day; we were to visit the battlefields close to Arras. The first of these was at Cojeul British Cemetery, where 349 are buried, with 35 unidentified, and two VC winners lie here: the first was Private Horace Waller of the 10th Battalion, the King’s Own Yorkshire Light Infantry; he was killed on 10th April 1917, aged only 20.  Captain Arthur Henderson VC, MC was the other and he had served in the 4th Battalion, Argyll and Sutherland Highlanders.  He died on 24th April 1917, aged only 23.

The lonely, Summit Trench Cemetery was the next stop; it is a little known site, accessed via a farm track, although a motorway runs close by. It was located on the Hindenberg Line and most of the London soldiers who lay here were only 18 or 19 years old, all killed in the assault on the line on 27 August 1918, nearing the end of the war. 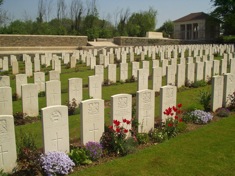 At Croisilles Railway Cemetery were German as well as British graves; it was located in a very tranquil and peaceful setting, and was right on the edge of the Hindenberg Line and was along a long wide, grass path beautifully maintained by the Commonwealth war Graves Commission.

The 7th Division attacked Croisilles in March 1917 and took it on 2nd April. It was lost on 21st March 1918 and recaptured by the 56th (London) Division on the following 28 August, after heavy fighting. On one grave, that of Tom Parker of the Manchester Regiment is written ‘Some day, some time, we’ll understand’

The majority of the soldiers buried in the cemetery belonged to the Guards, 7th and 21st Divisions. 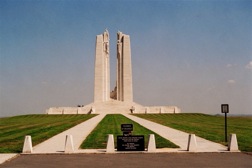 Vimy Ridge, its trenches and its huge memorial with its very striking twin columns, designed by Sir Walter Allward was the next stop.  Here Canadian and German troops had faced each other, separated only by large craters, of which there were thousands.  Also, at this site, was a memorial to the dead of the Moroccan Division.

From there we proceeded to the large Ecoivres Military Cemetery at Mont St Eloi.  This cemetery is really the extension of the Communal Cemetery, where the French Army had buried over 1,000 men.  Here lay 1,728 from the Commonwealth, 786 French and 4 German soldiers.

There was also Lance-Corporal James Holland of the 10th Battalion, Cheshire Regiment, who was shot at dawn.  Pal, Mike Jackson told us the unhappy story:

L/C Holland was placed in charge of four men in an outpost between British and German front lines, in no-man’s-land, on 8th May 1916.

After a short spell he reported that he was sick and asked to be relieved of duty.  He was told to return and stay until an officer had visited the outpost.

Shortly after, two Germans came across into no-man’s-land and he and his three men ran back to the British lines, to exaggerate the size of the enemy breakthrough.  On his way back Holland fired off a round at the approaching enemy.  The two Germans arrived at the British lines; one was unarmed and both were trying to surrender.

Holland was arrested and charged with, “Misbehaving before the enemy in such a manner as to show Cowardice.”  He was found guilty by a Field Court-Marshall and was sentenced to death.  He was placed back on duty in the trenches until 29th May 1916 and his sentence was carried out the following morning at 03.38.

In 2006 Section 359 of the Armed Forces Act pardoned 304 of the 346 executed soldiers.  This was an injustice to history, as the debate in Parliament, which led to this Act had many flaws, and no new evidence in any of the 304 cases was presented.

After lunch we proceed to Bourlon Wood, a Canadian Battlefield memorial park where the sun got hotter but we enjoyed a pleasant walk through the leafy glades with the knowledgeable Clive. Here lie those who died in the Battles of the Canal du Nord and Cambrai, right through to the capture of Valenciennes, Mons and the march to the Rhine.  The Canadian Corps suffered over 47,400 casualties in liberating about 800 sq kms and 228 towns and villages in France and Belgium.  It became known as “Canada’s 100 days”, and ran from 8th August 1918 through to Armistice Day.  Nearby is a memorial to 10 French Resistance fighters who were executed by the Nazis on 11th June 1944 including two British agents. Thus ended the Wednesday visits.