Thursday. We were being blessed with fine weather, as Thursday would prove to be as cloudless as the previous day, only a bit warmer.  Our visits would be to battlefields not far from Arras, and the first of these was to Cuckoo Passage Cemetery, in a lovely, rural setting.

Most of those buried here in this fairly small cemetery were from the Manchester Regiment all killed during the Battle of Arras in April 1917 when they walked into German defensive ‘traps.’

We then continued on to Rookery Cemetery, for which the actions were:  Heninel village, captured in a snowstorm on 12 April 1917 by the 56th (London) and 21st Division and the 50th (Northumbrian) Division, advancing from Heninel and in the two following days, captured Wancourt Tower.  The cemetery contains 55 graves, one of which is unidentified. There are many remote but beautiful cemeteries in this area.

The next stop was at Moeuvres Communal Cemetery Extension.  Here is buried Lieutenant Charlie Pope VC, of the Metropolitan Police. (He had served at Chelsea Police Station) He was killed on 15th Aprl 1917  at Lagnicourt whilst facing fearful odds.  This was a solemn visit for the Pals who had served, or were serving in the Met.  A wreath was laid at his grave by DAC, Professor John Grieve CBE pf the Metropolitan Police and the exhortation said by Jon Nicholls.  Moeuvres remained in German hands during the Battle of Cambrai, 1917, in spite of three days of desperate attack by the 36th (Ulster) Division. It was partly taken by the 57th (West Lancashire) Division on 11th September 1918 and cleared by the 52nd (Lowland) Division on the 19th. The communal cemetery was extended to the west by the Germans between November 1917 and March 1918.  There were 565 buried here, of which 263 are unidentified.  It also contains 93 war graves of other nationalities, most of them German.

The huge Somme American Cemetery at Bony was the next port of call.  Immaculately kept, and guarded by ex US marines, it is situated on a gentle slope typical of the open, rolling Picardy countryside. The cemetery contains the graves of 1,844 American dead. Most lost their lives while serving in American units attached to British armies, or in operations near Cantigny. The headstones, set in regular rows, are separated into four plots by paths that intersect at the flagpole near the top of the slope. There are two winners of the Congressional Medal of Honour here. The longer axis leads to the chapel at the eastern end of the cemetery.

The next visit was an interesting one: it was to “Fisher’s Keep” at Epehy, a reinforced, concrete observation bunker in the rear garden of a private home.  We arrived there as the Lady of the House, Mme Barbier, was making early preparations for a typical French picnic lunch at a large table in her garden.  Notwithstanding, she greeted us with great enthusiasm and warmth and was delighted to show us into her back garden. “Fisher’s Keep” was a British Observation Post, built in 1917.  It was taken by the Germans on 21st March 1918 and recaptured on 18th August 1918 by the 12th (Eastern) Diivision.

Here Charlie Addams of the Royal Field Artillery, grandfather of Clive, was wounded and thus, ended his war.  He was evacuated to Aldershot Military Hospital, when the Armistice was declared.

It was time for our own picnic lunch and it was to be in a beautiful setting at Pigeon Ravine Cemetery very close to Epehy.  Epehy was captured at the beginning of April 1917; lost on the 22nd March, 1918; and retaken (in the Battle of Epehy) on the following 18th September by the 12th (Eastern) Division. Pigeon Ravine Cemetery is on the South side of a shallow valley running East and West, which was the scene of a mounted charge by the 2nd Lancers on the 1st December 1917. 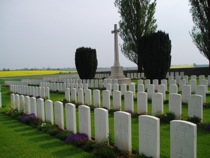 After a delicious lunch in the sunshine and much red wine, (apart from the driver) we headed for Wood Farm Cemetery, also in Epehy.  This  lovely cemetery takes its name from the Ferme du Bois, a little to the east and features a delightful entrance, the design of a French fortified barn.

Our final visit of the day (and of the tour) was to the tiny, Valley Cemetery Vis en Artois. Where lay the remains of 35 highly decorated and experienced, Canadian Soldiers all killed in close combat on 29 August 1918 in the attack on the Drocourt-Queant Switch line. They were buried where they fell in Orix Trench. Here, Jilly Grieve laid a memorial Cross in their memory and Colin Butler said the exhortation ‘They shall not grow old..’  Thank you Canada..

So ended another wonderful tour.  We had had great camaraderie and many moving moments.  It really had become an annual pilgrimage and very well organised by Jon, to whom, many thanks.  Also, thanks are due to our ‘ladies’ Coren Smith and Anne Jackson who expertly shopped for and prepared our lovely picnic lunches. We must not forget also, we were in the safe hands of Ray Waters, our excellent driver from Jeffs Coaches. See you all next year!