Fifty of the Hampstead Pals returned from France this week after their annual commemoration for Charles Pope VC at Moeuvres Communal Cemetery Extension on Monday 26 May. The event was made even more special by the attendance of Charles Pope’s Granddaughter, Mary Lotter and his Grandson Guy Nicholson, who flew in from South Africa with nine of the family in this, the Centenary Year of the start of the Great War.

Assistant Commissioner Cressida Dick QPM laid a wreath on behalf of the Metropolitan Police, in which Charles Pope served at Chelsea Division, before the Great War. Also in attendance was the Australian Defence Attache, Lt Colonel Scott Clingan who laid a wreath on behalf of the people of Australia and recited the citation of the VC award. Professor John Grieve CBE (Ex DAC Metropolitan Police) spoke about Charles Pope’s service in the Metropolitan Police and the Mayor of Moeuvres, Ms.Setan welcomed us to the village. Mr Nigel Stevens, represented the Commonwealth War Graves Commission and Mr Mike Jackson the London Branch of the Western Front Association. 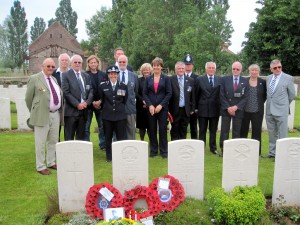 The Hampstead Pals have been laying wreaths every year at Charles’ grave since 1992 and in 2002 Lord Stevens (Then the Commissioner) attended the ceremony. A marvellous ‘London’ lunch had been prepared in the Moeuvres, ‘Salle des Fetes’ complete with ‘Chelsea’ Roast Beef, ‘Arsenal’ Ham, Potted Cockles, Pork Pies, Apple pies and cakes with gallons of Fullers London Pride Ale to wash it down. It was a lively but proud bunch of Hampstead Pals that arrived back at the Moderne Hotel in Arras at 5pm…

The Hampstead Pals 61st Tour of the old action spots of 1914-18 continued next day with a visit to Ypres Salient and on Wednesday the Battlefields of the Somme.

The Pilgrimage is best summed up by David and Sally Fisher who travelled from Stamford, Lincs,with the Hampstead Pals for the first time.. 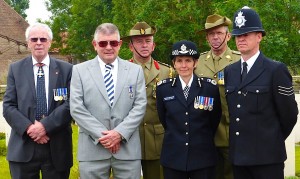 ‘Sally and myself wanted to thank you personally for such a wonderful trip last week with the Hampstead Pals. It was so informative, very poignant and yet such a lot of fun, that we agreed it was the best tour we’ve ever been on. It’s often a bit daunting to join a group, most of whom have known one another over a number of years, but, at no time did we feel “outsiders”, everyone was so friendly that we thoroughly enjoyed ourselves. A lot of that was down to you, Jon, with your vast knowledge of the subject, amusing anecdotes and digressions and belly-laugh jokes….(ping, ping….!!!) Not forgetting, of course, the bass-playing and the great sounds on an evening, just the right accompaniment to shed-loads of alcohol……!!!

So many, many thanks and, hopefully, we can join you in October and for many a year to come.