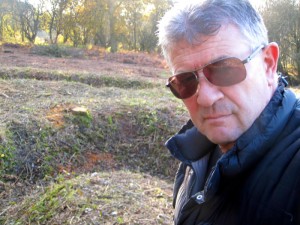 Yesterday afternoon, I took advantage of a beautiful Autumn day, to walk from my home in Hemel Hempstead to the little village of Potten End and beyond, to Berkhamsted Common which lies on the edge of the lovely, Ashridge Forest.  I had long heard about the old First World War trenches on Berkhamsted Common which had been dug by young soldiers of the Inns of Courts Officer Training Corps, nicknamed ‘The Devils Own’ which had been stationed in Berkhamsted right through the Great War of 1914-18. On previous visits to the common and golf course, I had failed to find them but yesterday was to prove lucky. The walk to the Common took one and a half hours. The sun was warm and the trees turning a beautiful gold and yellow. In spite of working up a sweat (It is uphill most of the way) I passed two excellent pubs on route..

According to the local Gazette, the Inns of Courts OTC dug 13 linear miles of trenches, mainly as a rehearsal for the forthcoming experience of real trench warfare on the Western Front and partly as fitness training for these young volunteers, some of them barely out of public school. The trenches were also to provide valuable experience in modern trench layouts, based on the real trenches in France and from hard lessons learned there.

The Inns of Court OTC provided basic and officer training at Berkhamsted. The subjects practiced were route marching, map reading, digging trenches, wiring, bombing, musketry, field tactics and strategy which took the form of complete battalion exercises in open warfare. Then there were the usual lectures, which covered a whole range of subjects from leadership, billeting, welfare and trench sanitation.

The Inns of Court OTC was originally part of the London Territorial Force and consisted mainly of men connected with the Law courts in the City of London and The Strand. The Corps came to Berkhamsted on 28th September 1914 and did not leave until June 1919. Around 14,000 men passed through the Corps with over 11,000 gaining commissions.  Three Victoria Crosses were awarded, besides numerous other decorations. A total of 2,147 men lost their lives and are commemorated by the lonely OTC Memorial, which stands on the Golf Course at the road junction from Frithsden Road into Berkhamsted. The memorial is still in solid condition but weather erosion has rendered it difficult to read and it could do with steam cleaning. The memorial also records that Colonel E.R.L Errington’s ashes were placed nearby. His official history of the Corps, written in the 1920’s gives interesting details:

“The situation of our camp at Berkhamsted was ideal, pitched in the field on the north side of the station and sloping gently up to Berkhamsted Place. The Squadron, both men and horses, were in the Brewery. Lord Brownlow placed at our disposal his private waiting-room at the station and also a covered-in shelter, both of which were used for Quartermaster’s office and stores. The proximity of the station did away with all transport difficulties. On the west side, we had ample room for expansion, and on the east side another large field, subsequently given the name of “Kitchener’s Field”, made an admirable drill ground.  The surrounding country was the best imaginable for training, being so varied … To the north lay the big common, later intersected by some 13,000 yards of trenches, then Ashridge Park, undulating and beautifully timbered, placed entirely at our disposal by Lord Brownlow, and so away to the open downland of the Chiltern Hills. To the south, hilly and enclosed land leading to Hawridge and Cholesbury Commons. To the east, farms and enclosures admirably adapted for night operations; and to the west the private grounds of Rossway and Champneys, always open to us; with woods, farms and enclosures to and beyond Tring. We went where we liked, and did what we liked. The big landowner, the small landowner, and the farmer were all equally ready to help. If there was any trouble, Major Mead at once got on his horse, rode over, and smoothed things out.  For the squadron, long treks without touching a road, wide movements, distant reconnaissance; for the infantry, wood fighting, canal crossings, river crossings, big fights on the open commons and downs, local fighting among the enclosures, every form of open training was available. In the neighbouring villages, Nettleden, Little Gaddesden, Aldbury, Ashley Green, Bovingdon, the awakened villager turned to sleep again with greater security when he realised that the outburst of firing, and the swift rush of feet through the village street, betokened nothing more than a night raid of the Devil’s Own… As soon as we moved into billets the Rector, Mr Hart Davies, placed the Court House at our disposal for an Orderly Room …  Through the kindness of Lady Brownlow we were able to begin by using her hospital at Ashridge.”

The network of trenches can be found just a short walk at the rear of the car-park opposite the memorial. I understand that The Chiltern Conservation group is aiming to map out all of the existing trenches and clear some of the scrubland. I noticed that work was already progressing. The trenches that exist and have resisted the erosion of time are quite unique. I guess there are around three hundred yards of fortifications, quite deep in places and they reminded me of the trenches at the Newfoundland Memorial Park on the Somme battlefield. Apparently, many of the old trenches had been filled in by the Golf club in the 70’s. Doubtless to be denied! ‘Kitcheners Field’ once a bustling small town of Nissen huts and tents, is now the sports field of Berkhamsted Public School and it can be seen next to the ancient ruins of Berkhamsted Castle. 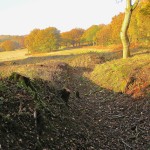 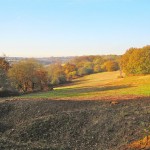 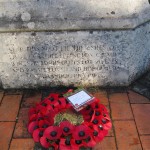 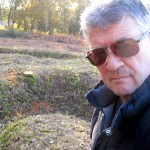 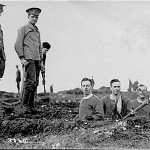 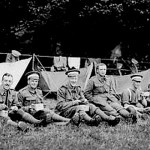 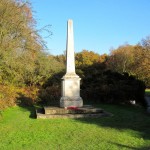 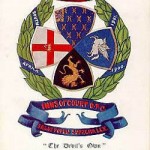 The Devils Own Postcard 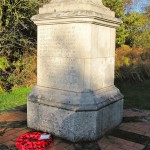 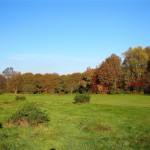 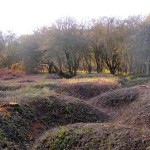 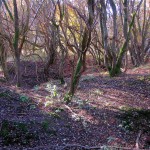 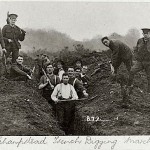 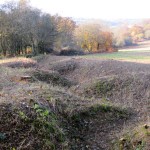 Kevin Cutts
Hampstead Pals are in The Times today