This was the third trip for Carol and I with the Hampstead Pals to the Great War battlefields of France and Belgium.

What was the weather going to be like, after the cold winds of the first half of May?  Amazingly the warm weather returned the day before we were due to leave and so we hoped that it would continue during our week in France.

We left by coach from the Metropolitan Police Sports Club at Bushey, in Hertfordshire, shortly after 7.00 a.m. on Sunday 16th May, heading for the P&O ferry at Dover.  Our guides for the trip were Jonathan Nicholls, assisted by Clive Harris.  This was to be Clive’s first trip with the Hampstead Pals and he proved to be very knowledgeable and interesting, and very keen on route marches! 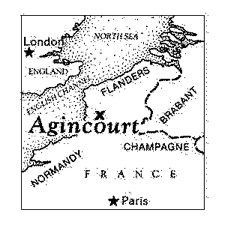 On arrival in France we digressed away from the Great War to visit the site of a much earlier and victorious battle: Agincourt; the French call it Azincourt. First we visited the very interesting museum there, before moving on to the site of the battle itself.

Here we heard from Professor John Grieve of Henry V’s army of 6,000 taking on a French one of 36,000 and winning, his archers devastating the French, who fell over each other in the mud, creating mayhem and a huge loss of life. It was a crowd disaster on a massive scale. Jon showed us some medieval weapons, including a cloth yard arrow with a fearsome bodkin point.

Our next stop was at Fillievres Cemetery, where was buried, amongst others,  Lieutenant Edward Felix Baxter VC, of the King’s Liverpool Regiment, who was killed on 18th April 1916. Baxter was keen motor cyclist and had ridden in the 1911 Isle of man TT races. Prior to a raid on the hostile line he was engaged during two nights in cutting wire close to the enemy’s trenches. The enemy could be heard on the other side of the parapet. Baxter, while assisting in the wire cutting, held a bomb in his hand with the pin withdrawn ready to throw. On one occasion the bomb slipped and fell to the ground, but he instantly picked it up, unscrewed the base plug, and took out the detonator, which he smothered in the ground, thereby preventing the alarm being given, and undoubtedly saving many casualties. Later, he led the left storming party with the greatest gallantry, and was the first man into the trench, shooting the sentry with his revolver. He then assisted to bomb dugouts, and finally climbed out of the trench and assisted the last man over the parapet. After this he was not seen again, though search parties went out at once to look for him. There seems no doubt that he lost his life in his great devotion to duty. This cemetery receives very few visitors.

We arrived at the Hotel Moderne (sic) in Arras at around 6.00 p.m. and checked in for our stay.