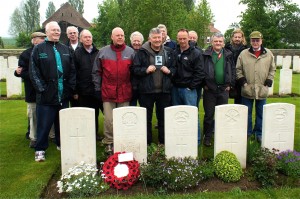 With 47 people on the coach and ten others on the waiting list, this years’ popular tour to Arras and the Great War battlefields had all the makings of a resounding success. Everything went (almost!) according to plan and it seems, judging by your letters and emails that the coach will be full again next year! Every year we try to do something different as well as visit the traditional action spots on the Somme and at Ypres. On Sunday 20 May we took a different route to Arras, via the coast road to Boulogne and made an interesting visit to Les Baraques Military Cemetery at Calais, where we heard from Mike Jackson, the intriguing case of the murder of a British Police Detective in 1917, when he was shot by an officer deserter he was attempting to apprehend in Calais. The story then moved on to Terlincthun British Cemetery where the murderer was buried after being tried and executed. Just near the cemetery was the interesting Napoleonic fort of La Creche – fortified by the Germans during the Second World War and battered by the Allies in 1944 – overlooking the harbour of Boulogne, where we enjoyed an interesting guided tour by local ladies!

On Monday we embarked on a tour of the 1917 Arras battlefields, this year being the 95th Anniversary of the battle. The ‘Cheerful Sacrifice’ tour commenced at the Arras memorial to the Missing. We also made our annual visit to Moevres Communal Cemetery where John Grieve CBE laid a wreath on behalf of the Metropolitan Police at the grave of Charles Pope VC, ex Chelsea Police Constable who gallantly died, ‘facing fearful odds’ on 15 April 1917.

Tuesday was a wonderful day on the Ypres Salient and included a visit to Dozinghem Cemetery and the story of Revere Ostler, the great grandson of Paul Revere. Among our regular stops was Tyne Cot Cemetery and Sanctuary Wood where we laid a wreath in memory of Bill Hay, a veteran soldier of the 9th Royal Scots ‘adopted’ by Hampstead Police in 1980 and his ashes scattered on the graves of his ‘youthful chums’ at his request following his passing in 1985. A lovely picnic lunch with smoked salmon & champagne in the sunshine at Hill 62 simply made the day. Together with a good dinner in Ypres, prior to the Menin Gate ceremony of remembrance at 8pm.

Wednesday was spent on the 1916 Somme battlefields but not before we had made a visit to Haute Avesnes Military Cemetery just north of Arras and heard the story of ‘Galloper Jack’ and his famous War horse, ‘Warrior.’ We also went to Aubigny Communal cemetery where we visited the British officer’s plot of the Arras battle and Colin Butler told us the story of Lt Colonel Pretor-Pinney of the 13th Rifle Brigade, killed at Arras. In the French Civilian cemetery we also saw the graves of fathers and sons, wickedly murdered by the German, SS Totenkopf in May 1940, some boys as young as six years old, holding their father’s hand facing the Nazi machine gun. One could only imagine the pitiful scene. Later that day, we laid a wreath at the beautiful, Devonshire Cemetery in memory of our dear friend & Police Pal, Kevin Cutts, who had sadly died before his time, a month previously. ‘See you in my dreams’ by Joe Brown was played on the music box and there was hardly a dry eye. (See obituary)

Thursday was a sunny day spent of the Somme battlefields and the ‘Battle for the Woods’ with champagne at High Wood and a wonderful picnic at Delville Wood. From there, we made a visit to Ovillers Cemetery where we laid a wreath in memory of and old friend and veteran, Alf Razzell of the 8th Royal Fusiliers whose battalion had been totally decimated in the assault on the village in July 1916. Alf had become a great friend of the Hampstead pals and we had taken him back to France on eight occasions. He died in 1996. This trip was, altogether a very enjoyable and rewarding experience, in the company of like-minded friends. The dinners at the Moderne Hotel in Arras were the best yet, accompanied by good wine and superb entertainment. Bookings are now being taken for our May tour, 12-17th May 2013. There is also a tour to be announced this for this Autumn. Thank you all for your unfailing support and remembrance.
JN.