Here are just a few of your comments from some of the many happy letters received;

A Journey to Remember 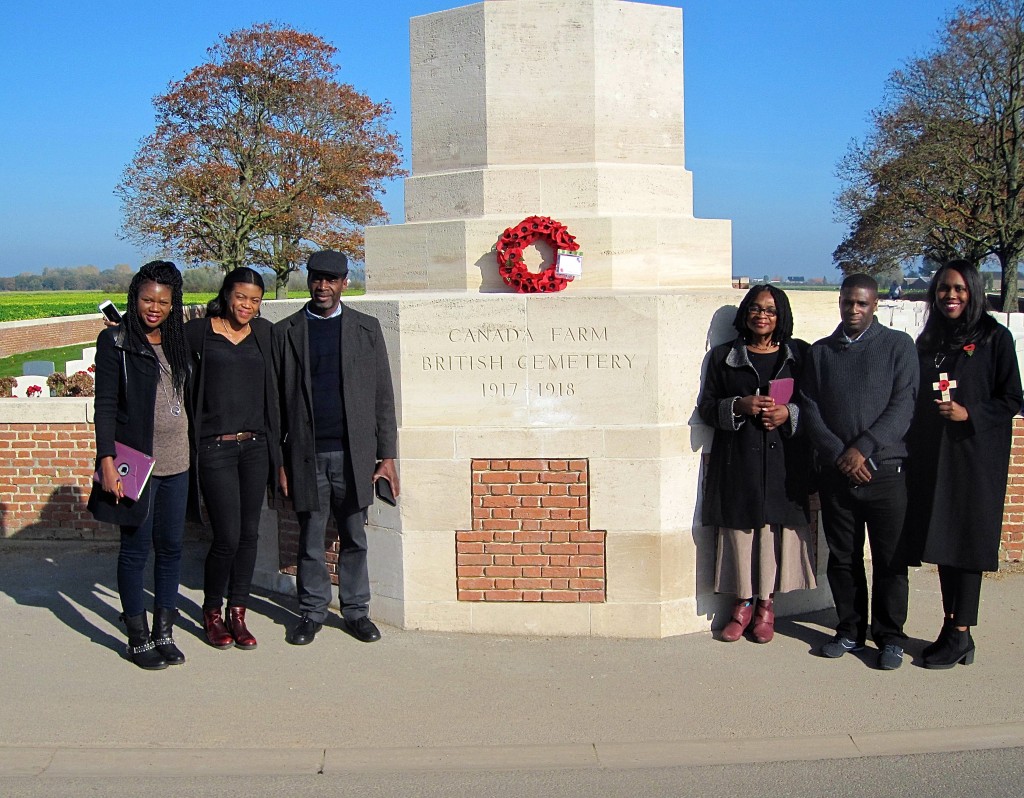 “Sunday November 1, 2015 was a very momentous occasion for our family.  After 98 years, and thanks to the assistance of Hampstead Pals, we were finally able to be reunited with our Uncle (and for some of us – Great-Uncle) Private Robert Smith.  He was a First World War Jamaican soldier from the 7th Battalion of the British West Indies Regiment who was killed on 12th September 1917, age 23, in Ypres, Belgium.

Private Smith was one of many ordinary people who made the ultimate sacrifice and who gave their lives for the benefit of others.  His story highlights to us the fact that people from across the British Empire and beyond, and not just those from the British mainland, fought and died in the World Wars

The experience of travelling with Hampstead Pals was absolutely fantastic from start to finish. Myself and two of my children, plus a brother and two of his daughters, were collected from my house, in South London, by Jon Nicholls and Mick How. We immediately took to their kind, warm personalities and were made to feel extremely welcome.  The minibus was spacious and very comfortable. Later in the day, and to our surprise, Jon opened a hamper of food – enough for 2 days, I would say – which automatically  gave us the feeling of being with friends rather than just with an excursion company We were extremely impressed and grateful that Jon took the time and effort to conduct research, which revealed further information about our Uncle’s regiment and other interesting and relevant details. These included copies of documents, such as pages from an official war diary which showed how and when Uncle Robert was killed.

Following our pilgrimage to the cemetery, Jon and Mick took us into the historic town of Ypres where we had lunch, after which we visited the famous Menin Gate War Memorial. This is a huge monument inscribed with the names of about 55 thousand British and Commonwealth soldiers from the first world war, whose bodies were never recovered.

We would highly recommend Hampstead Pals to others who would wish to make a journey such as ours.
Beulah Coombs and family
Thornton Heath London.

“Just a short note to say how much I enjoyed my 4th trip with ‘The Pals’ to the Western Front. The week was a mixture of remembrance, fellowship and, as always loads of fun & jokes. It is a heady mixture! It was good to see many old friends on the coach, together with quite a few new ones. As always, a journey to remember.”
Brian Batt (Air Commodore RAF)
Ilford

“Just a little note to say how much I enjoyed the Tour of the battlefields with the Hampstead Pals and to thank everyone for their camaraderie and friendship. The organsiation was superb, and each day was a delight due to the warmth and humour of everyone on board. I have not been in such jolly, friendly company for such a long time, not laughed as much as I did that week. To remember and learn about the young lads who gave their lives for us was a privilege and to listen to Willy Mohan bringing to life scenes from battles and your commentarioes each day was a treat. I also enjoyed the poetry contributions and Colin and Mary’s presentations. Altogether, a very good mix. I hope to join the Pals on another trip.” Annabelle Priestley
Bedford

“Many thanks again, once again for an excellent trip. Maureen and I thoroughly enjoyed the whole week and would like to thank you and ‘your team’”
John Hine
Bushey

“We are truly fortunate in being able to share our annual pilgrimage of remembrance with such a band of kindred spirits; friends for whom the poignancy never will be lost of each rolling hillside battlefield site, each windblown cemetery, each story related, be it individual feats of courage or as is more usually the case, non attributable accounts of unsung gallantry performed by a myriad of unsung heroes. Who can fail to be moved by what we have experienced out there? Upon returning home, it is usual to get questions along the lines of, “Was it a good trip?” Of course it was. There is no such thing as a bad trip over there., Just being there and ‘feeling it’makes it all worthwhile. Then of course there is the social calender afterwards, but that’s another story. Love and best wishes to all our friends down there. Keep the torch burning. God Bless.”
Mike Olley
Merseyside Police

“Annabelle and I loved the trip. It was really great and we were so lucky with the weather. Our picnics in the sun were so nice. Thanks to all of you ‘Gentlemen’ for making our trip so good – it was truly marvellous! Love to you all. Two places for the Ypres trip please!
Jo Bond xx
Swindon

“It was a good trip. People spoke to me about how much they were enjoying it. Always soul cleansing to serve The Boys”
Mary Freeman

“Thanks for a brilliant week”
Andrew Seed
Norwich

“Just a few lines to thank you,once again for all your efforts to ensure a thoroughly enjoyable – and quite fascinating – visit to the Somme. I thought that the day trip to Mons was interesting and imaginitive and more than justified the experiment. Thanks go to you, particularly to Mary, Willie & Ray who contributed so fully to a wonderful break. I almost forgot to mention the catering corps who perfromed extraordinary feats for our picnics! However, I’m never going to that Den.w.Anker restaurant in Ypres again!”
Dick West

“Just wanted to thank you again for last weeks trip. It’s not often in life that you experience something that has a really profound effect upon the way you think, but for me, last week changed so many of my ideas and preconceptions. I learned so much from you, Willy and the others. The dignity at the graves and the deep sense of appreciation for the sacrifice of so many, which you, Mary and the rest of the Hampstead pals displayed, made amarked impression on me. Added to which the great fun, music and enourmous amounts of alcohol made it a trip to remember. Please pass on my thanks to all the others for their kindness and friendship to a battlefield novice ‘scouser.’ Hope to see you again next year”
Bob Shepphard
Liverpool

I thought I should drop you aline of thanks for your kindness and generousity – with the champagne bottles etc! the ’50th’ was indeed a memorable tour. John Grieve and Mary Freeman were both excellent with their presentations and full marks to Willy and yourself for keeping the show on the road. The Pals really are a great group of people to get away with. Harry Carr, for me is a tonic I laugh more on a Pals trip than I do the rest of the year!
Eric Page
Guildford

“I want to know who hid the Gin”
Jaque Downing
Birmingham

“On a Hampstead Pals trip, you are surrounded with such special friends, love and fellowship.  Don’t bother doing the Lottery. You have already won it.”
Caroline Carr
Birmingham

“It was the bloody tinned fruit”
Colin Butler